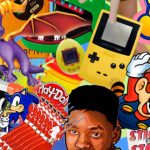 Ahh nostalgia, that moment when something from your childhood triggers happy childhood memories that you wish you could go back to and at the same time make you feel very old.

So for today’s trade furniture blog I will be biting the nostalgia bait and seeing if my childhood memories hold up as well as a Cube Bookcase in your study so let’s get on with it.

The year is 1996 and I was but a mere boy so playing outside was you know just something that had to be done, and considering this was the 90’s and the internet was only just picking up steam it was great fun going to the park with my friends, playing outside with a ball or whatever I had decided to entertain myself with, coming in and getting some juice out of the Dakota Sideboard lots of happy memories.

2016 verdict: Now being 24 physical activity has become something of a taboo like leaving a cup on the Indian Style Coffee Table without a coaster, too many alternatives to running around the place all of the time.

The 90’s were a great time for TV as cartoons particularly superhero ones actually had a decent story and the pinnacle of this was the X men television series. 3 full seasons of seeing my favourite superheroes kicking bad guy but on a weekly basis was a great as well as each episode a good as the one before, and with it being a mainstay of Saturday morning TV.

2016 Verdict: Unlike a lot of shows back then this is not only still watchable today, but is genuinely engaging all these years later, you see the show did not water anything down it told a mature storyline that dealt with serous subject matter something that only the Batman series was able to emulate but never surpass – as such listening to that theme song start on my solid wood TV Unit shows me I’m still up for a good time.

Back in the day my games console of choice was the Nintendo 64 and I had years of fun with this thing, so many classic games that are considered not only timeless but also revolutionary, games like Mario 64, Goldeneye, Star Fox and of course Zelda made this a mainstay till around 2002.

2016 Verdict: Well considering how much time has passed since then, it a little hard to sing their praises when you see what can be done today, at least from a technical perspective. The gameplay is till amazing as is the level design, however seeing as how a lot of these classics have been remade the verdict today is that it was of its time.

In my child hood my Saturday mornings were filled with Digit, SMTV, CBBC and CD UK which pretty much kept me entertained till midday with my breakfast on the Mango Coffee Table.

2016 verdict – considering Saturday morning TV no longer exists in a traditional sense I cannot say how it is these days, however when I see what the kids do get to watch on a morning now I pity what is considered entertainment as the shows that I got were much, much better and are still on loop to this day.